Posted on March 5, 2012 by realtimefarms

“Today, my favorite bread is the baguette,” Mark Pollard, co-owner of Bread Euphoria in Haydenville, Massachusetts tells me. He explains that his favorite loaf changes almost daily, and by looking at the fully stocked shelf of golden crusts and flaky white centers, I can see why. The baguette, a traditional French bread, is a fitting favorite, as it embodies the mission and inspiration for couple Mark and Geri Pollard’s café.

France, highly looked up to as an international leader in fine cuisine, has attracted food lovers from all over the globe to see and taste French cooking first hand. Esteemed chefs and foodies like Julia Child and Alice Waters are notorious for bringing French styles of cooking and cuisine back to the states.  Mark Pollard followed a similar path.

“I went on a trip to the South of France and I sort-of had this epiphany…” Mark explains. “People would argue the merits of one bakery over another […] and the farmers markets totally blew my mind”. Struck by the importance and simplicity of food in French culture, Mark decided that he wanted to bring the essence of good, quality, food back to Western Massachusetts. And thus, Bread Euphoria was born.

The bakery and café, located just outside of the small city of Northampton, is home to a variety of breads, pastries, pizzas, and cakes, all made from scratch in-house. Although the bakery started as a one-man operation, it now operates with the help of approximately twenty employees. Everything is baked fresh daily, and locally sourced ingredients and natural starters are always used when possible. Mark explained that almost all of their breads use a sourdough starter that ferments naturally using good bacteria from the air. Baking bread without the use of commercial yeast aids in the digestion process by allowing complex carbohydrates to be broken down, and allows for nutrients to be absorbed more easily. 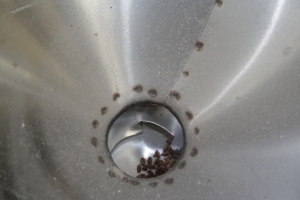 In addition to aiding human health through fermentation, Mark and Geri hope to improve the health of local economies and the environment by buying local ingredients to use in their baking.  “In the summer, almost all of our produce comes from local farms,” Mark assured me. Come by the café or farmer’s market during August, and their scones are sure to be filled with juicy blueberries or strawberries from one of several Western Massachusetts berry farms. Perhaps their biggest source of local ingredients is Upinngill Farm, located…you guessed it…up in Gill, Massachusetts.  This farm provides the bakery with the wheat used in several breads and pastries. They grind all of their wheat in-house, using a large metal grinder that you would definitely not want to get your finger stuck in. The pastries and pizza dough are all formed by hand in the bakery, and then sold at farmers markets and at the café.

Mark and Geri do not only source locally, but they give back locally as well.  Often times they donate bread that was not sold in a day to the Double Edge Theater in Ashfield, a local art space. Their café, attached to the bakery, is used as a meeting and study place for all members of the community.

Appreciation and support of the local community, coupled with simple, quality ingredients, is what makes every product at Bread Euphoria extra delicious.