Get Fresh News! Getting Fresh in New Mexico.

We’re sponsoring musicians Coco and Lafe on their 2011 “Get Fresh” 100 Market Tour across the U.S.! You heard right, 100 farmers markets coast to coast! Don’t forget to check out the page dedicated to them on our blog, and today we have an update from them!

If you’d like to listen to a song of ours while you read, here’s the title track from our newest CD:  Big Bang!

Last week we played markets in Los Alamos and Taos, New Mexico, plus Midwest City and Edmond, Oklahoma. We also performed live on KRSN in Los Alamos and KTAO in Taos. We played a house concert at the amazing JC’s Funky Hair Ranch in Edmond and wrote a couple more songs. Fun, busy week. 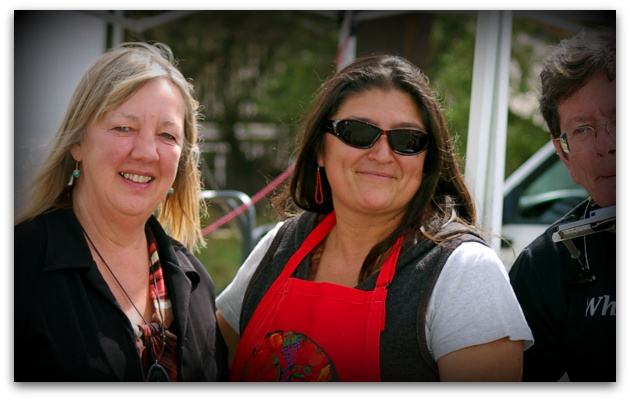 Cindy is a whirling dervish, moving from one vendor spot to the next during setup at the Los Alamos Farmer’s Market, making sure everything was weighted down against strong winds and that everyone had what they needed. She made us feel very welcome, and has collected some great vendors. 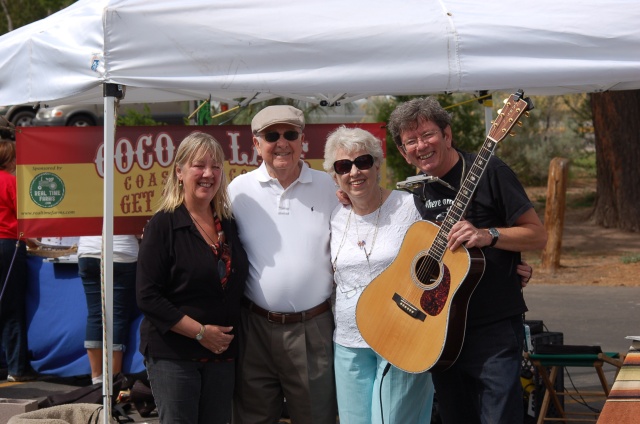 Eight people approached us when they saw our Vermont license plate. All 8 were either from Vermont or had lived there at one time. 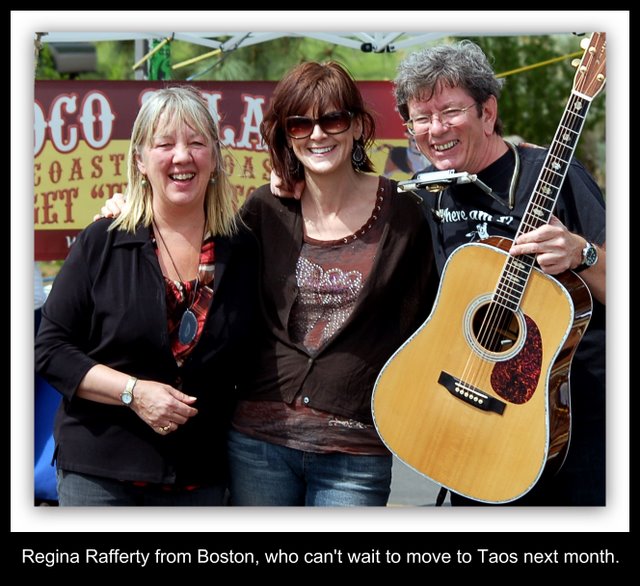 Regina grew up in Fairlee, Vermont and knows some of the same people we do!

Coco just corrected me: Regina is moving to Los Alamos, not Taos. Taos’s loss for sure. 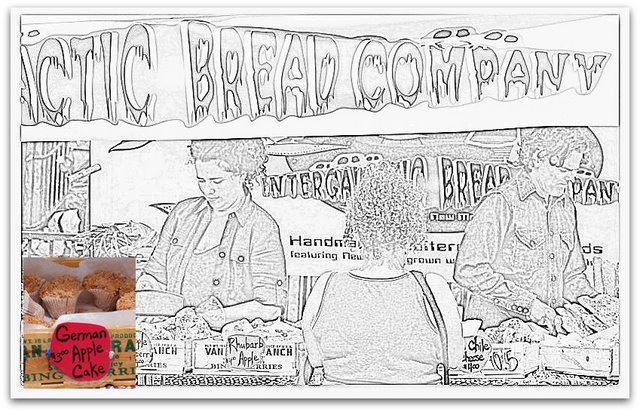 Amy & Todd started this company 10 years ago. They make Mediterranean style bread from all local ingredients that they get from other farms. Recipes change based on what’s fresh and available. Amy: “I love seeing little kids tear into our stuff.” They attend three markets per week, and educate people that meals SHOULD change with the seasons. Skip tomatoes in January if you live in Los Alamos. They gave us breakfast and lunch: my favorite was the German Apple Cake. Exquisite flavors and wonderful texture. 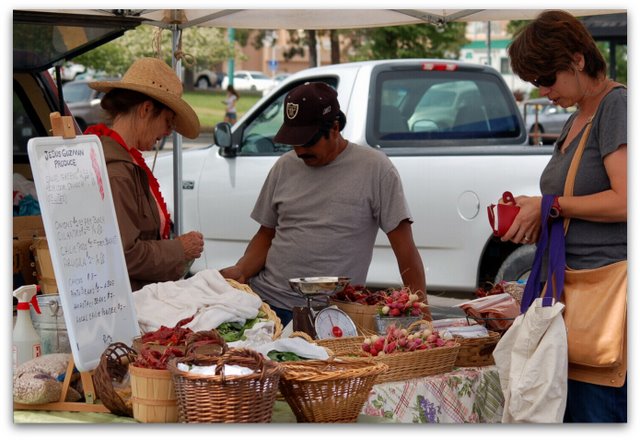 3 Farms, 3 Acres, and primarily a one man grower. Eat your heart out Superman.

Jesus Guzman Farms produces a variety of Chiles, Corn, Cucumbers and much more. He also enlightened me on the ancient and labor intensive production of ‘Horno Corn’. You strip the corn off the cob, throw it in an Horno oven (you’ve seen them: they’re like those chimney ovens you put in your backyard) overnight, which dries and smokes it. To rehydrate, you simply throw it in a pot with beans for sweet, smokey flavor. Jesus delivers to Chico’s Restaurant, but primarily sells direct at three markets. Kate says she helps “a little.” I loved meeting them both. Jesus says one of his favorite reasons for coming to market is the new methods he learns from other farmers.

Barb is the “plant department,” Wendy is the bird department. Wendy makes fans and jewelry, Barb loves talking to customers. “We spend so much time talking to the plants we gotta get out.” 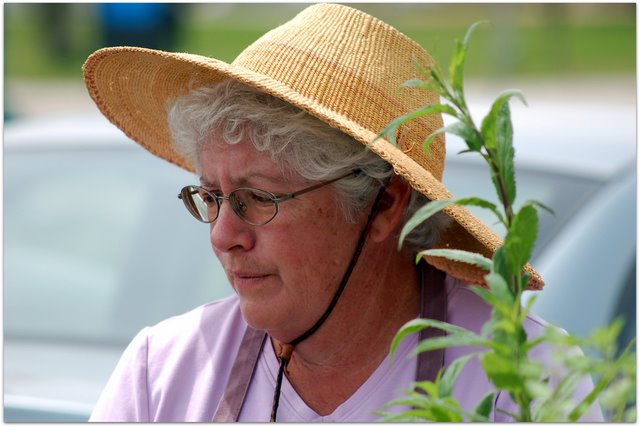 KRSN is the heritage Radio Station for Los Alamos and was born as part of the Manhattan Project in 1945. Owned by David and Gillian Sutton, they are community activists and love living there with their three children. We played a few songs on ‘The Live Morning Show” with Dave and Nancy. They asked great questions, we had a lot of laughs (it was too early for margaritas), and they loved Lilla. Nancy is a hoot. You can listen to them live on the web. Our second year playing the Taos Farmers Market:

Taos is a magical place, with a rich mix of cultures that is reflected in the art, entertainment, farming and social happenings. It’s also water deprived. Snow melt is directed into “ditches,” properly known as acequias, and each acequias is managed by a commissioner. You get one day a week to go fetch your allotment. Can you smell politics? Every region has its agricultural challenges, but this is a tough one getting tougher with less and less snow melt every year. One farmer told me, “We’re going to run out before the season ends.” We won’t mention global warming. 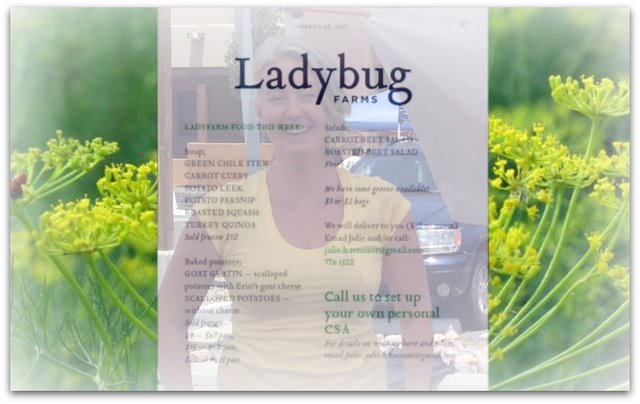 Julie Tennant and a sample menu from Ladybug's CSA program

Julie Tennant and Helen Martin grow greens year round, run a CSA, make wild pesto and create menus around whatever they are harvesting. Julie is also a beautiful graphics designer, Helen is a lifelong farmer and herbalist. Finally, we have not one but two ladies to replace Wonder Woman.

Brad & Courtney’s stall was directly across from ours two years in a row. Great neighbors, they own every one of our CDs and put honey in our basket every year. I think Brad knows the words to all our songs. We want to tow them behind our Rav to all the markets.

"Food as Part of History"

Meet Matias (“Matt”) of Grandma Joan’s Natural Jellies. The fruit is picked wild along the Rio Grande riverbed. The juice is boiled down to a gel the traditional way. They’ve been doing the market for 12 years and sell “…along the roadside” and on the internet. Matias is very passionate about the production process and has a thousand stories.

We were scheduled to play the Taos Pueblo Farmers Market last year but I (Lafe) got stoned: kidney stoned, actually, to the tune of 11.3 mm (if you can’t picture that please don’t try). They were very understanding and booked us for this year. Would Madison Square Garden do that? 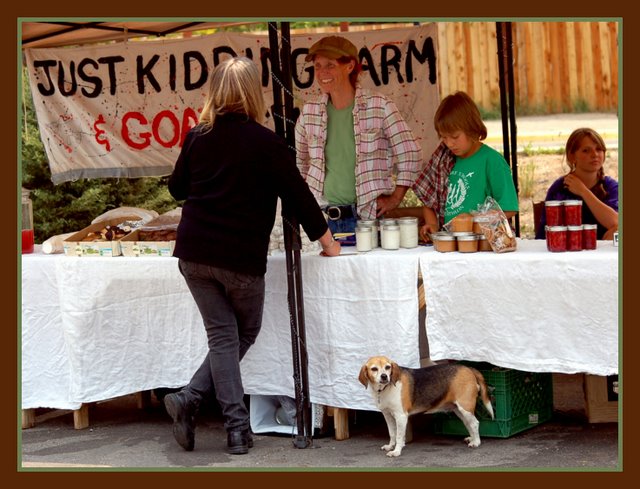 Aidan insisted he wasn’t a “manager,” but he worked hard and was just as enthusiastic as his brother Dylan and Lady Helana. They also run the Just Kidding Farm and Goat Club.
They make and sell Ricotta, Goats Milk, Dulce De Leche, Strawberry Jam and much more. They are a meld of young entrepreneurs and farmers. I was shocked last year at their maturity, this year I am simply impressed. But they hang around Martha, who is as unusual as the color purple in congress. I bet if I had the time to dig, I’d find a group of family and family friends who have influenced these charmers.

Sidetrack: Lilla says I have spent too much time talking about other people, so here she is:

Lilla and Coco sharing a moment in Taos.

There is so much story behind Quintana Farms:

Liz is so informed, so passionate, and so in love with the farm(ers) that it’s hard for me to believe that anyone in America can be pessimistic about our youth or the world’s future. This planet is scattered with heroes like her. (Just look at Aidan, Dylan and Helana above – at the same market.)

Thomas of Rasti Fari Farm harvests wild mushrooms, grows organic vegetables, and makes a delectable squash pie. We field tested the pie. We stained the upholstery in our Rav with happy drool. 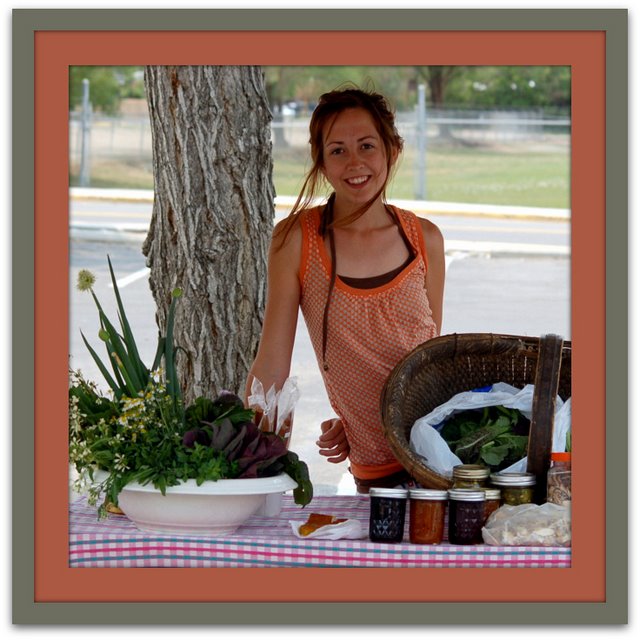 Charde and her prince Jeffrey are caretakers of this beautiful and unusual bed & breakfast. They milk the goats, gather eggs from the Emu, grow herbs and organic, seasonal greens, make cheese and clearly are loving life. If you have five minutes to gaze at some incredible pictures of a truly one-of-a-kind B & B, check out the Taos Organic Bed & Breakfast’s website.

Coco and I also performed live on KTAO Solar Radio with much loved (by the community and for good reason) Paddy Mac. Dozens of people approached us after our appearance on his show to tell us they heard us and to share stories about him. He’s a tireless activist during community crises, tells “it” like it is (he had a row with the Forest Service while we were there over the poor communication about humongous fires.)

We drove through the smoke on the way to Oklahoma, but that’s another blog. Thanks to all of the above and the many more we didn’t have room to mention here.

CONTEST ALERT: If you spot Coco & Lafe at your market, take your picture with them, email it to us at feedback@realtimefarms.com (don’t forget to include the location of the photo!), and you’ll be featured on our blog!

3 Responses to Get Fresh News! Getting Fresh in New Mexico.