It’s been weeks since we’ve written. We were tired.

Here’s a song to listen to while you read, if you’re so inclined: Someone to Ride the River With.

We’ve driven through forest fires in New Mexico, floods in Iowa, and cows in Kansas. We’ve taken hundreds of pictures of farmers, including over 500 of Ohio’s very cool farmers markets. So we’re going to write sdrawkcab (That’s “backwards” written backwards.) We’ll work our way from Ohio back to New Mexico…

The North Union Farmers Market at Shaker Square is a year round, producer-only market with over 100 vendors and a lot of great energy.

This market is set on two parallel streets and a train runs down the middle! There is a park, a band stand, trees and Dewey’s Coffee Shop, one of my favorites in Cleveland.

Emma Anderson is the manager of the Shaker Square Market but was out of the town the day we were there. This is Tiffany Leeper who was covering for Emma. Here she is getting ready to show us her behind-the-head rock star moves. The photo was actually taken at Crocker Market,, which she does manage. She is a get-your-hands-dirty manager, walking the markets from end to end helping vendors set up tents, run electricity, solving problems and I think sneaking bites of samples when the vendors were otherwise occupied. Fearless with the guitar. About Shaker Square she wrote: “… the greatness of that market is due to her [Emma’s] hard work!” It is a GREAT market!

Meet Diane Sikorski of Humble Pie Baking Company, one of the best bakers and jam makers in the northern hemisphere. And I’m not saying that because she let Lilla the beagle stay at her house, and Lilla insisted we stay too: shoppers and chef owned restaurants will swear to her goodness. We got a  look at her ingredient sourcing and commercial kitchen. We’ll be featuring her in a “behind the scenes” blog later. In the meantime, yum.

In 1922, a group of doctors planted fruit trees on 125 acres of land and ran a roadside stand. In 2005 Matt Vodraska (pictured above), his brother Chris and their parents bought the land and “…started from scratch.” Here’s the fun part: Chris was in a doctorate program and decided he wanted no part of a basement laboratory. Matt was in art school practicing photography and glass work.

Why? Matt: “There’s something intrinsically good about planting a seed, watching it grow and then harvesting the fruit of your labor.”

It’s not a good picture of her, but that’s Frances on the right in the yellow. Frances works the markets for them.

Rittman Orchards grows 20 varieties of squash, zucchini and various veggie crops along with tons of fruit.

They sell to Cleveland Clinic Hospitals, their own farm stand and numerous restaurants, including the Flying Fig where Karen Small creates gourmet dishes with locally sourced food.

Our friends ask us why we love Cleveland. Cleveland GETS fresh.

Glen and Lois own 150 acres plus grow 10,000 plants in a 30 by 124 foot hydroponic greenhouse. They heat it with a corn burner. The storage tank is a converted milk truck container. I only saw the pictures but can’t wait to visit. They follow organic principles and grow lettuce, basil and arugula plus more. They supply restaurants, 2 colleges and direct to you at the markets. Lois is extremely knowledgeable and passionate about Oasis Acres: “It’s been a learning curve, but we now earn more from the greenhouse than we do from the other 150 acres.” These two aren’t survivors: they’re thrivers. (Don’t tell me there’s no such word as “thrivers”. I made it up. All words were made up. It’s a fresh word.)

There are lots more pictures in the Shaker Square slide show here on Real Time Farms, but here’s a few to leave you with: 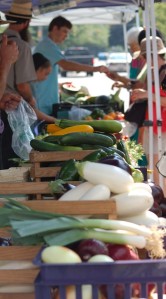 They showed up in a flatbed truck piled with veggies and left with nothing but corn husks. Read all about them in the Crocker Park Farmers Market Blog.

Amy of The Olive Tap

Oils and vinegars. I’ve been cooking with them for two years now and love them.