Posted on October 31, 2011 by realtimefarms
This post is from one of the interns in the Real Time Farms Food Warrior Fall Internship Program. These interns are in Asheville, Austin, Nashville, Portland and San Francisco, collecting data, pictures, and video on the growing practices of our nation’s farms, gathering food artisans’ stories, and documenting farmers markets. We all deserve to know where our food comes from!
blank
Why, why, WHY would I get up at 6:30 AM on a Saturday morning? I didn’t. I got up at 7:15, fifteen minutes late to pick up my best friend to go to the Half Moon Bay Art and Pumpkin Festival. I thought she was being ridiculous about being stuck in traffic, but as we crawled along Highway 92, I was glad we left when we did. Had we left any later the extra 15 minutes we spent in traffic would have easily turned into an extra hour. Many of the parking lots we came across were already full, and the event had just started!

Farmer Mike has been creating masterpieces for 25 years. The Atlantic Giant Pumpkin, seen here is a variety known for yielding humongous results.

Each year the city of Half Moon Bay hosts the Half Moon Bay Art and Pumpkin Festival, featuring local artists, a haunted house, parade, live music, and of course: pumpkins. Pumpkins in every form you can think of: smoothies, pancakes, and even mac & cheese. If you’re not stuffing your face with it, you’re staring at it in awe: Farmer Mike, “the Picasso of Pumpkin Carvers”, chisels away at hundred pound pumpkins, creating whimsical 3-D faces and scenes in the fleshy gourds. If that doesn’t wow you, the top five winners of Safeway’s World Championship Pumpkin Weigh-Off will. Fork-lifts, cranes, and harnesses are used to place the winners, usually weighing in over a thousand pounds, on display for crowds to gawk and pose in front of. Farmers from all over the country enter in hopes of placing first: at $6 per pound former winners have been taking home over $10,000.blank

While I easily could’ve taken home a pumpkin from Half Moon Bay’s many nearby farms, I had already visited Peter Pumpkin Patch in Petaluma, about 75 miles North. About fifteen minutes from downtown Petaluma, amongst the rolling green hills you’ll spot a field of orange. You have arrived at Spring Hill Dairy, where each year Larry Peter opens up the farm to the public for pumpkin season. Here you can dig for your own potatoes, taste cheese mere steps away from where it was made, and pick your own pumpkin fresh off its vine.blank 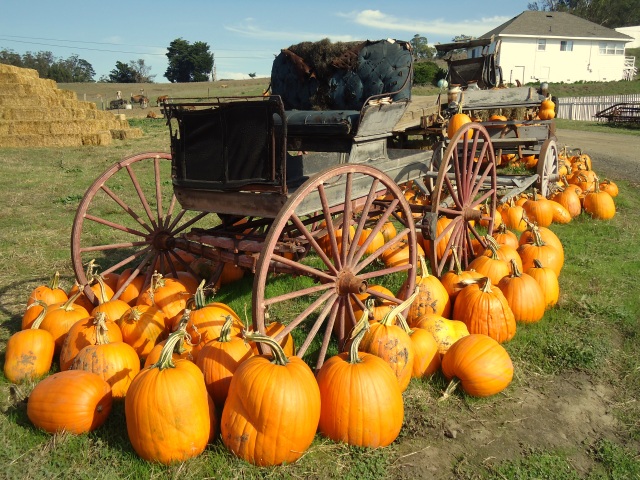 Larry Peter has been hosting the pumpkin patch for the past 16 years, and each year it becomes more popular amongst locals and visitors from nearby cities. Today school buses trek their way to the patch; up to a few hundred children every day during the fall season get a hands-on farming experience.blank

Andy sharing the history of the farm.

“Larry wanted a place where kids could run around and not have their moms worry.” Andy says. Andy Wells works the pumpkin patch each year, pointing out to visitors great tips on choosing your pumpkin, or where to dig for potatoes. Andy starts up his tractor and gives visitors tours of the 480 acre farm, pointing out the white Sears Roebuck Kit Home perched above the patch, the hay pyramids, and beyond them, their 350 Jersey cows.
blank
While the farm isn’t certified organic, it is certified humane, from cow to pumpkin. Peter and his team rotate the pumpkin and potato crops; while the produce is being grown on one field, the other is being planted with fava beans for their cows, replenishing nitrogen levels in the soil. The pumpkins and potatoes benefit greatly from the hands-on treatment, and bright, robust Jack-o’-lantern varieties meet you on your drive in. On the opposite side, visitors roll their provided wheelbarrows over to the potato field, unearthing red bliss, russet, butterball, and yukon gold potatoes. Up on the hill, housed by a large tent you’ll find more Jack-o’-lanterns, as well as over a dozen lesser-known pumpkin varieties and winter squash. Shades of orange, yellow, green, white, and even blue-green in an array of sizes and shapes jog your creativity.
blank
Grace Wells, who works for Spring Hill Dairy, leads visitors on a delicious cheese tour, sampling a smorgasbord of different flavors, from fresh unadulterated curds to their award-winning Sage Cheddar. She also provides tips on their pumpkins—the Jack-O’-Lantern may be your go-to for carving a spooky face, but for a smooth pumpkin puree, go for the Sugar Pie variety; albeit smaller, it yields a less-stringy, sweeter flesh!
blank 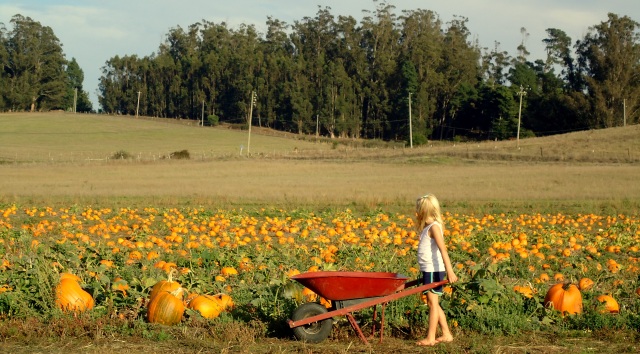 You may have been on a field trip to a pumpkin patch yourself as children, but if faced with the opportunity, drive out to a pumpkin farm! The experience is unmatched, the farmers armed with wealth of knowledge—from carving tips to recipes. Meet the land, animals, and people behind your future jack-o’-lantern!
blank
Nom nom Noshing,
Charlotte
Fall 2011 California Food Warrior