My Thanksgiving: Dedicated to Farmers and Animals Everywhere

Posted on December 5, 2011 by realtimefarms

Just a little warning: This post is about how turkeys end up on our tables. I chose not to include any really crazy pictures. But the writing may be graphic. It is honest, it is my experience, and I encourage you to read on.

We are used to seeing turkeys in a few different ways,
blank 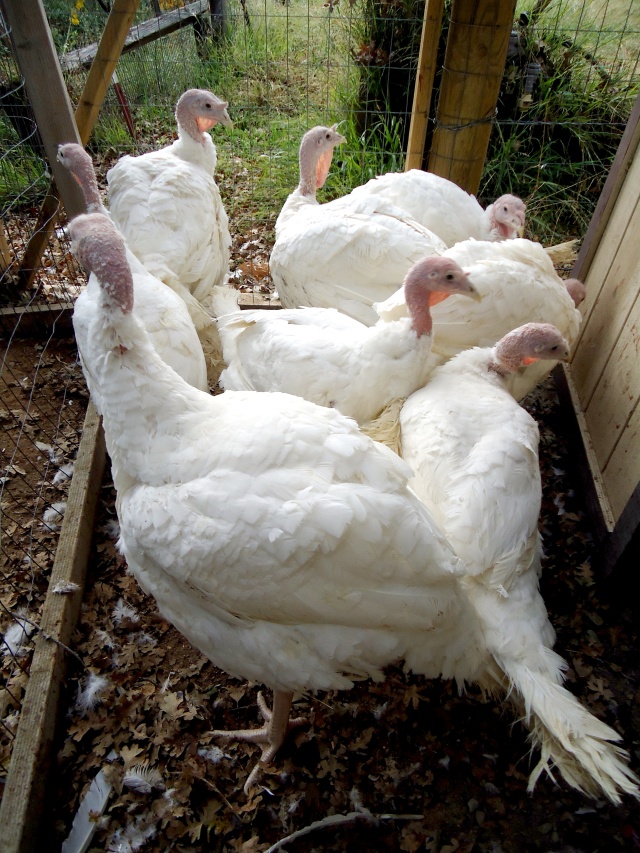 or (hopefully) roasted to golden perfection and dished up with the usual suspects.
blank
And if you’ve been in a supermarket, they’re nicely packaged, sometimes with a nice little picture of a farm stuck onto the form-fitting plastic.
b
I recently, unexpectedly, experienced turkeys in a way that gave me something else to be thankful for. On a beautiful Friday morning before Thanksgiving I set out to Pampero Longhorn Ranch in Sunol, CA with the intent to interview the farmers there, take some pictures of animals, y’know, what I’m s’posed to do.
b
Well nothing in my life goes as planned (cliché, I know), and all of a sudden I found myself forearm-deep in the cavity of a freshly slaughtered turkey scraping its ribs for lung tissue (not so cliché).
b
I drove up the steep driveway littered with wispy feathers. Above me people were already hard at work, having been at the ranch since 8 AM processing turkeys. From an exchange of e-mails I knew they would be doing this, and just figured, “OK, cool, I’ll snap some photos of the turkeys while they’re still alive and try not to get in anyone’s way.”
b

After taking a few shots of the turkeys I was offered a knife by one of the volunteers.

Don’t get me wrong– I’m not a complete stranger to slaughter. My dad used to take me to goat farms to pick out a goat to slaughter, cut up, and prepare for party guests. I have only two distinct memories:

I’m also not a vegetarian. I try to limit my meat intake to every few days, but I do eat meat. When at dim sum, I’ll order chicken feet. I order tripe in my pho and adore bacon wrapped hot dogs that vendors grill up outside of LA nightclubs. And don’t get my started with Korean BBQ.Disclaimers aside, I guess I wasn’t quite mentally prepared for what I was going to do.
b
Pampero Ranch owners Jim Frei and his wife, Cynthia, have been hard at work with a dozen volunteers. The volunteers were made up of customers from the Mountain View Farmer’s Market who jumped at the chance to pick up their turkeys fresh from the farm (literally).  While some people pay upwards of a couple hundred dollars to take a poultry processing class, Jim was more than happy to teach at no charge as long as you were willing. The volunteers had divided into stations: killing, (initial) de-feathering, (scrutinized) de-feathering, then gutting. Minutes after I arrived I’m running my hands over the naked, mostly featherless body of a turkey. We’re making sure no feather shafts have been left embedded into their skins after the de-feathering machine. We picked and prodded at the pores like obsessed teenagers, and occasionally took a pair of pliers to the skin. 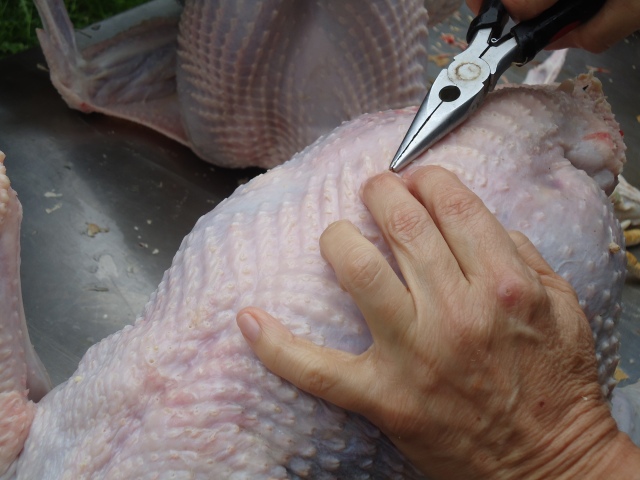 Before the turkeys came over to this station they had been initially de-feathered after slaughter. They were scalded in 150 degree water, and then put into a de-feathering machine, where most of the feathers were easily rubbed off.
b
After the turkeys were clean of feathers, they went over to be disemboweled. At this station we cut off the head, then removed the neck at the shoulders. The feet came off by breaking them at the joint, leaving the two familiar drumsticks that will be later fought over at the Thanksgiving table. It took me until my third turkey to get into a rhythm. The entire time you had to be separating organs from membrane, and the entrails came out pretty easily with a slight slurp. The oil gland, located at the base of the tail, was sliced off and discarded. As were the testicles and lung tissue, easily accessible after everything else was gone. After saving the neck, heart, liver, and giblets, the turkeys were washed, then bagged and weighed. 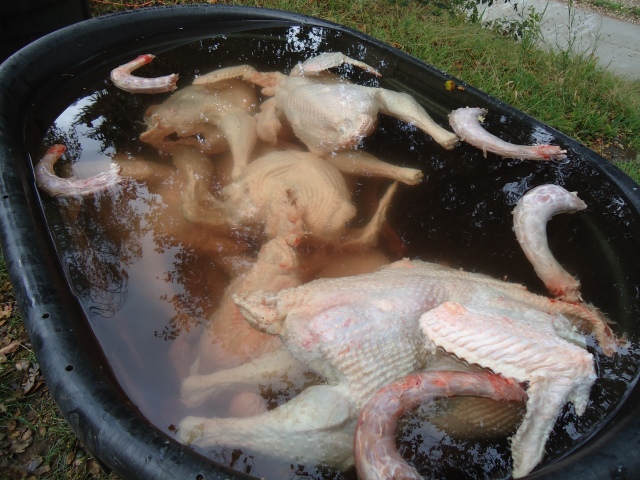 It took me until the last hour I was there to garner the courage to help at the kill station. The turkeys were grasped by the neck with one’s non-dominant hand, and the other took hold of the turkey’s feet. The turkey would then be hoisted underneath one’s arm in a move ironically dubbed the “turkey hug” before being placed face down into metal cone, which kept them from flapping. One person would then hold its legs down (this was my job) while another stretched its neck out, and cut the main artery right below its jaw. Only after a minute of bleeding out did they react, by kicking their strong legs. The experience was incredibly sobering, holding down the warm feet of such a beautiful animal as it kicked against you and writhed in the cone. Right beneath the bird, staining the dirt and leaves was its blood, mingling with the blood of the birds who had gone before it. I could say that this majestic bird died honorably, and that his expression conveyed to me understanding and acceptance, but that’s a sugarcoated lie. These are animals. This bird’s throat was just slit and his blood was dripping into his own eyes.

Shortly after the last of the turkeys were being processed, it began to rain. The volunteers began trickling home, myself included.
b
I drove through the green and golden hills that flanked nearby Fremont on my way home, absorbing everything I experienced. I thought about small farmers like Jim and Cynthia, who raise their animals with no antibiotics or hormones, who pay extra to feed their animals good food (not a diet heavy in corn and soy). They’re not in the business for profit, they just want to feed people real food. I thought about the work we did that morning and afternoon. What we did could probably have been done in an hour at a large processing plant.
b
The turkey is the crowning centerpiece of any Thanksgiving feast. Why are we so anxious to get the turkey just right, fiddling with different recipes and peeking into the oven every 15 minutes, when the bird cost us less than a dollar per pound to begin with? Grocery stores across the country offered deep discounts and promotional offers on turkeys (I heard of turkeys selling as cheap as $0.47 per pound) in hopes to make up the cost in Thanksgiving sides and ingredients.
b
Why don’t we pay top dollar to farmers like Jim and Cynthia, who guarantee that their pastured turkeys lived their lives under the sun, amongst the grass? They were fed well, and lived well– isn’t that what we try to do ourselves? (In respect to full disclosure, I ate a conventionally grown turkey on Thanksgiving).
b
The question I pose is by no means new, yet we continue to grapple with the ethics and financial cost of what we feed ourselves and our families. Yes, times are difficult. We’ll try and stretch our dollars, especially during the holidays. Its important to remember that we vote with our dollar every day.  While we try and save money, we may be throwing important votes away. These votes could feed not just our families, but the families of farmers.
b
Food politics aside, I unearthed a much deeper respect and gratitude for the farmers and animals that feed us.
b
And not just for the holiday season.
b
As you chop and slice you way into the holidays and beyond, I ask you to think of the hands that grew and fed your meal before it graced your plate. I encourage you to get to know your food, by connecting to those who know it best. Whether you’re stocking up last minute at the grocery store or at your local farmers market (where, I guarantee you there are no lines!), someone handled your meal before you did.
b
To the people dedicated to feeding others, and the animals destined to be our meals, Thank You.
b
Know Farms.
Know Food.
b
Charlotte
Fall 2011 Bay Area Food Warrior
b
This post is from one of the interns in the Real Time Farms Food Warrior Fall Internship Program. These interns are in Asheville, Austin, Nashville, Portland and San Francisco, collecting data, pictures, and video on the growing practices of our nation’s farms, gathering food artisans’ stories, and documenting farmers markets. We all deserve to know where our food comes from!

1 Response to My Thanksgiving: Dedicated to Farmers and Animals Everywhere