Carrots Come From the Ground, and Chicken Comes From…

Posted on September 12, 2012 by realtimefarms

On a visit to the Biltmore Estate last spring, I stopped by the on-site barn to check out some of the farm animals living there. Wandering around the visitors section, I watched as children visiting the historic site with their families gazed, wide-eyed, at the livestock. One boy tugged his father’s sleeve and asked something to the effect of “why is that called the same thing as what we eat for dinner?” He was referring, of course, to one of the chickens strutting about the barnyard. After his father explained that this was no mere accident of nomenclature, an expression that reflected a mixture of horror and fascination came over the boy’s face. Huh. I went to the barn to see the animals (they had a variety: chickens, goats, rabbits–most of the usual suspects) but what I came away with was a sense of disquiet.

It’s no secret that many kids growing up today have no idea where their food comes from. Just as the boy I observed that day in North Carolina had gone years without realizing that the primary component in a chicken patty once had feathers, many kids (and adults) couldn’t tell you how, let alone where, fruits and vegetables are grown. I’m sure many first graders would be shocked, and maybe a bit perturbed, to discover that those cute little baby carrots they dip in ranch dressing grew in the dirt.

Of course, there are many reasons this is problematic. The system by which food is produced and distributed is rife with injustice that it is difficult to combat because the route from farm to plate is so mysterious and convoluted. Informed consumers (let’s say, those who know that a chicken patty is made from chickens) are potentially more likely to make choices that contribute minimally to the destructive system.

In order to break down the farm to plate mystery, some farms, such as the Battery Urban Farm, are focussing their efforts on teaching kids about agriculture. Founded only two years ago after eight students from Millennium High School’s Environmental Club requested a space in which to grow vegetables, the Battery Park Urban Farm has already made a huge splash among local kids. Through programs that bring students to the farm on a weekly basis or for one-time farm field trips, the farmers working in Battery Park have already helped hundreds of kids engage with the idea that food does not simply appear but has to be grown or raised. By June, 2012 they were working with 800 students and have been expanding further since. After weeding, digging, and harvesting, many of these kids are allowed to take home fresh, organic produce to eat at home.

The bulk of the farm’s output, however, goes to two local school cafeterias. School 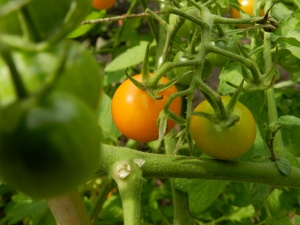 children thus have access to about 150 pounds of fresh produce, in many cases cared for with their own hands. In a huge city, that’s an unprecedented experience for many of the kids. Many of them, according to the farm, leave workdays on the field with a better understanding of where food comes from and what makes it grow.

Though the farmers and teachers in Battery Park focus just on teaching about organic produce, I think they are teaching the kids more than what a ripe tomato looks like on the vine. They are teaching them to question and to wonder about what sustains them, something everyone, children like the little boy at the Biltmore and adults alike, should do.

As I explored Battery Park Urban Farm, it seemed to me that the success of a project like this makes a huge difference in the lives of all who are allowed to share in it. Children pranced up and down rows picking ripe fruit and talking about compost. Maybe some day all children will get to do the same.

But for now, working chard and playing chard in NYC,

This post is from one of the interns in the Real Time Farms Food Warrior Internship Program. These interns are collecting data, pictures, and video on the growing practices of our nation’s farms, gathering food artisans’ stories, and documenting farmers markets. We all deserve to know where our food comes from! Boring legalese we feel we must include: this was written by a real live person who has their own opinions, which we value, but that do not necessary reflect, though they may (or may not), the values and opinions of Real Time Farms. That is for you to guess and us to know.