An Urban Foodie’s Take on Butchering

Posted on December 10, 2012 by realtimefarms

A curious snout at Able Farms.

Whether it takes place in a windowless warehouse in Kansas with hundreds of knives flashing, or in the back of a farm-to-table restaurant – butchering is also beginning to play an important role in the DIY food movement. “Butchering” refers to any part of the process of slaughtering, cutting and curing meat. I attended a class at Linnton Feed and Seed from Megan Denton of Able Farms, a farmer, butcher and gourmet foodie. What I learned surprised, challenged and impressed me.

Perhaps inspired by the bounty of charcuterie and cut to order steaks, many novices are turning to DIY backyard butchering. I was a skeptic of the bourgeois movement towards experimental slaughter. I thought it was self-indulgent and self-congratulatory and that maybe a group of urbanites were attending the slaughter class for the social currency.

As I hold myself as part of that group (a curious urbanite whose interest in slaughter is suspect) I decided to examine my motives. If I were to look at this movement without suspicion, I would say, isn’t any attempt at self-awareness and engagement in the food system a step in the right direction? I think the answer is yes. No matter how much it might pain some venerable butchers to see skinny-jean wearing brand conscious city-dwellers naively and unceremoniously killing animals, it speaks to a larger paradigm shift toward local sustainable meat production.

I asked myself how was I going to make my experience in Megan’s class unique and not part of the larger “listless” social movement. I didn’t have to worry at all, in the experienced hands of Megan. She worked as a butcher at a number of Portland restaurants.  Charcuteries are growing in prominence and preeminence in Portland for their locally cured and butchered meat. The act of taking an animal’s life lends itself to being a transportive experience and there is a certain ceremony to Megan’s class.

Butchering is an art form; this surprised me. Megan explained that butchering – from the outside a rather savage and straightforward profession – involves much technical skill, the pinnacle of which is the ability to determine how best to cut an animal to make the meat taste the best and not waste anything. I learned that without these skills, the process of killing an animal can actually cause the muscles and vessels to seize and affect the quality of the meat, its texture and taste. 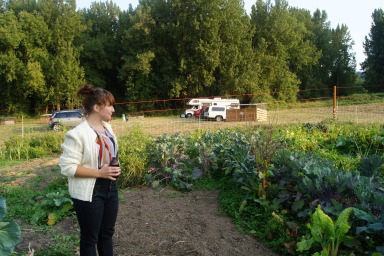 And that is what impressed me the most about Megan’s class; the ceremony and compassion. Farming is an act of selflessness. Local farming/butchering helps empower communities to be self-sufficient in every way making communities more resilient. There will always be residual negative energy from people who have devoted their lives to butchering towards the novice. It is inevitable that as a movement with so much history and so many actors becomes hip and vogue, there will be some backlash from old-timers. As Megan puts it,  the tension originates because for many butchering is a way of life, versus a hobby. To navigate around this tension, her creed is humility.

You can find Megan all over Portland, at the Saint Johns Farmer’s Market at her stall selling her produce from Able Farms, the farm she runs from her home in St. Johns and property on Sauvies Island, or teaching classes at the Linnton Feed and Seed.

This post is from one of the interns in the Real Time Farms Food Warrior Internship Program. These interns collected data, pictures, and video on the growing practices of our nation’s farms, gathered food artisans’ stories, and documented farmers markets. We all deserve to know where our food comes from!

Boring legalese we feel we must include: this was written by a real live person who has their own opinions, which we value, but that do not necessary reflect, though they may (or may not), the values and opinions of Real Time Farms. That is for you to guess and us to know.

1 Response to An Urban Foodie’s Take on Butchering