One of HausBar’s two donkeys stops grazing just long enough to pose for a picture in front of the hand-dug garden beds. No gas-powered tools are used on the farm, meaning each of the 51 garden beds was dug with pitchforks and shovels.

What I’m looking at is black soldier fly compost, a method of composting that uses black solider fly larvae to breakdown matter that cannot be added to traditional compost, such as dairy and meat waste.  When a black soldier fly detects a food source, she flies to the source and lays her eggs, which hatch on the food and start eating, eating, eating.  When nature tells them it is time to become flies, they crawl out of a channel that is built into the compost bin and fall down a tube.  At the end of the tube the insects are scooped up by chickens who are waiting for the tasty treat.

“It’s almost a 100% conversion of protein,” she explains.  “It’s really an amazing little life cycle.”  I am touring HausBar Farms, an eco-conscious operation owned and run by Dorsey Barger, former co-owner of Austin’s Eastside Café, along with her partner Susan Hausmann.  They supply eggs, chicken and vegetables to Austin restaurants and food artisans.  It is a relatively new addition to the Eastside, but a welcome replacement to the crack houses that only a few years ago marred the now verdant 2 acre lot.  And just as the landscape of her neighborhood has changed dramatically, so has the path of Barger’s life. 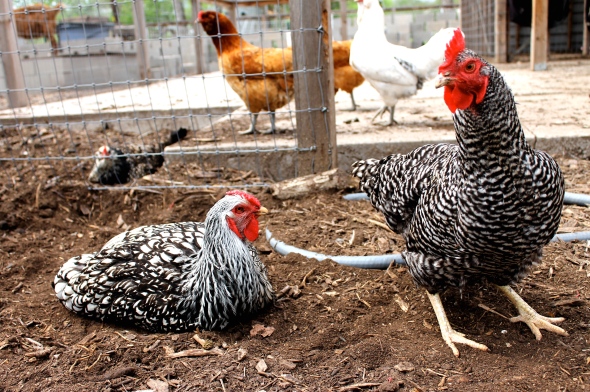 Laying hens, taking a midday dirt bath to get rid of mites

“When we started Eastside Café, I didn’t even know what a vegetable growing out of the ground looked like,” she claims.  Barger has clearly gone through a huge transformation in the past 20 years, from a number-crunching restaurant owner to an impassioned urban farmer with a healthy obsession with composting.  When she was put in charge of the garden behind Eastside Café in 2007, something clicked.  “As soon as that happened, I fell madly in love with gardening and chickens.”  She had three chickens to start with.  Within a year, that number grew to 300.  “It was just something I fell so in love with.”

But it is Barger’s passion for recycling that truly drives the way HausBar functions.  Besides the black soldier fly composting used to handle the leftovers from the chicken butchery (of which there is not much!  They use nearly every bit of the chickens–brains, eyes, gizzards, feet, etc.), the farm uses three other methods that convert would-be waste into nitrogen and vitamin rich soil.

Kale, kohlrabi, lettuce and radishes spring up in the garden beds

The first method puts the chickens, donkeys, and lone goat to work.   Mulch from a tree trimming company is spread out on the ground where the chickens and other animals like to peck around.  Between the scratching, eating, and pooping, the mulch is quickly turned to compost that is then put through a screener and used on the garden beds. 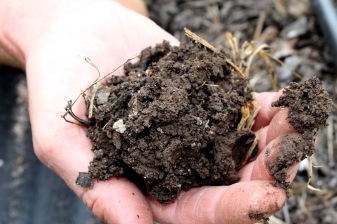 The second method is vermicomposting, which uses worms–usually red wrigglers–to break down organic material into nutrient-rich worm castings. Barger keeps the worms and food scraps in an outdoor bin.  When the worm castings are ready for use in the gardens, she places bananas in a corner of the bin, drawing the worms to migrate to that one area and leaving the rest of the bin clear for harvest.

The last method is fairly common and requires very little to start up.  Thermophilic (heat) composting uses moisture and oxygen to fuel naturally occurring microbes that break down organic matter.  It is the biological action of the microbes consuming the waste that heats up the compost pile, and all that is required to keep this heating and decomposition going is the occasional turning of the compost as well as the introduction of water.

By utilizing all of these composting techniques, HausBar not only recycles the waste created on the farm but also organic waste from local landscaping companies.  The reuse of these materials greatly benefits the earth by diverting organic matter from landfills where it would go through anaerobic decomposition, releasing methane gas into the atmosphere.  It is also a boon to gardeners who are able to return nutrients to the soil, benefiting the health of their crops.  Barger points out one very special product of her compost operation, feather meal, which is a nitrogen-rich powder made of broken down and ground up feathers.  It can be a fairly expensive addition to gardens, but that is a non-issue at HausBar Farms where the waste-not want-not attitude prevails.  “We get our feather meal by taking our own feathers and turning them into compost.  All these little things are so exciting to us!”

Multi-colored eggs, so fresh they are still warm to the touch

Barger is in constant exploration of new and more efficient ways of running her farm.  She builds, experiments, tests, fiddles and makes things up on the spot.  One of her successful undertakings is a mobile feed house that allows chickens–and only chickens–to wander freely in and out throughout the day with constant access to their food while keeping out curious donkeys and goats.  Right now she is experimenting with ways to raise rabbits outside of a cage, a trial made difficult by predatory hawks.

After nearly two hours of guiding me through her farm, Barger says it is time to get back to work.  It takes me a moment to regain my role as interviewer, as I have gladly fallen into the part of eager student and lost all sense of time.  She extends an open invitation to return and explore further, and I gobble it up hungrily.  Dorsey Barger has led me through an inspiring and educational day, the kind of day I hope to return to over and over.

This post is from one of the interns in the Real Time Farms Food Warrior Internship Program. These interns are collecting data, pictures, and video on the growing practices of our nation’s farms, gathering food artisans’ stories, and documenting farmers markets. We all deserve to know where our food comes from! Boring legalese we feel we must include: this was written by a real live person who has their own opinions, which we value, but that do not necessary reflect, though they may (or may not), reflect the values and opinions of Real Time Farms. That is for you to guess and us to know.